It's a Bird's Life at Hope Villa 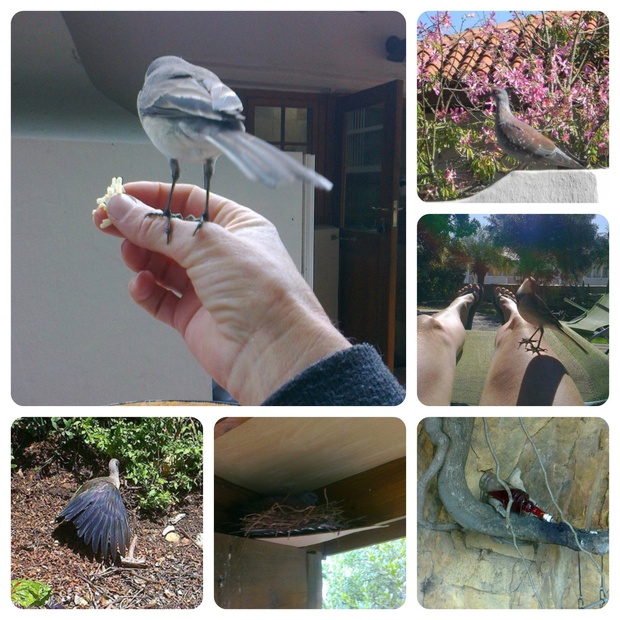 The call of the Cape Robin. Morning has broken at Hope Villa.

The backdrop to Hope Villa is a forest of Milkwood tress.  A haven for many bird species. And they keep me busy – observing, feeding, watering!  The Rock Pigeons love seed and bread. The Witoogies, Bulbulls and Mouse Birds love fruit.  The Weaver birds eat everything.  And all birds love grated cheese!  Propped on the gnarled root of a Milkwood tree we placed a bottle of coloured (this attracts the birds) sugar water which I have to fill at least once a day.  The Weaver birds fight over it!  The soundtrack in the Hope Villa garden is one of birdsong.

Let me tell you about Mr and Mrs P.  These are two Rock Pigeons who love me.  Probably because when they were trying to build a nest under the verandah ‘afdak’ I helped them.  I built them a ledge onto which they built their nest.  But after two sets of babies Friedel decided that it was not ideal to have them nesting there so he removed the nest.  This really upset Mr & Mrs P.  I took the nest and moved it on to the top of a garden store cupboard that we have in the back garden.  Mrs P found the nest and accepted it in its new position and a few days later she was sitting on two more eggs!  But sadly one night something (Cape Gray Mongoose perhaps?) ate her eggs and she was afraid to go back to the nest.  We once again had a very upset Mr and Mrs P so I moved the nest back to its original place under the ‘afdak’ on the front verandah.  Mrs P is now sitting on eggs again!

Our next regular visitors to the garden are three Hadadas.  Mom, Dad and teenager.  They spend hours in the garden, digging their long beaks deep into the ground in search of something crunchy.  I have just planted spinach seeds into a section of my veggie garden and I am not sure how many plants will grow because the hadadas love this patch of newly turned earth.  A while ago they discovered our pond in the back garden.  It is not a big pond but that doesn't stop the hadadas from bathing in it.  Two at a time.  A tight fit.  A sight to see!  But they flap and grunt and upset the water plants, then get out and preen, and a minute later the temptation becomes too great and they do it all over again.  When they have finished their bathing they move to the aloe garden in the sun and spread their wings to dry.  Soon they will be lying next to the swimming pool on the sun loungers, asking me for beach towels!  When one sees these large birds with the big beaks you would never think that they have such lovely characters!

At certain times of the year we are very fortunate to have three Knysna Loeries as regular visitors into our garden.  We have some yellowwood trees in our back garden and when the berries on these trees are ripe the loeries come and feast on them.  They are shy birds but if you sit very quietly in the garden you are able to see them hopping through the branches, cackling in glee as they eat berry after berry!

For the past couple of weeks we have watched a big eagle hunting here.  I havent yet been able to identify her but she is big and beautiful.  Yellow feet and yellow markings on her face, she swoops down into the trees in search of prey.

The call again of the Cape Robin and the day is done.  A sign for the fruit bats to come out of hiding.  The Milkwood trees come alive with hundreds of bats swooping through the branches, feeding on insects to give them energy for their nighttime escapades.