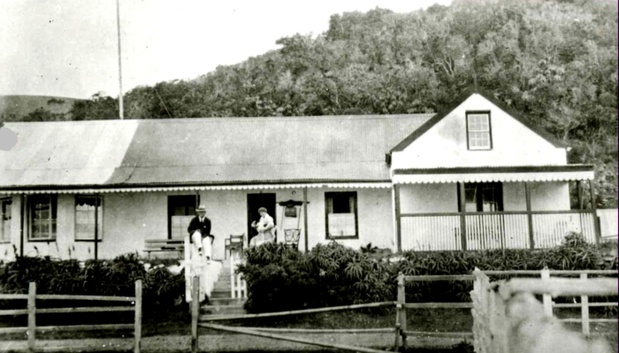 The present piece of land on which the Hope Villa building stands on is today known as Knysna Erf 4869. However, this wasn’t always the case...

And to many a passer-by, or traveller viewing our website as a possible holiday accommodation option, Hope Villa is just an ordinary house.  But to us and those who know its history, it is a really special place that we feel privileged to be part of!

Hope Villa is an historic house which was built in 1901.  The home is built of stone taken from the cliffs behind the house and locally made clay bricks, and features yellowwood floors and windows frames, oregan pine ceilings and doorframes.  Hope Villa is situated in the middle of three original plots, which were later consolidated into one erf.  It is the only house out of 6 original houses built at the Heads in the early 1900’s that remains standing in its original form today.  (It has obviously undergone some lovingly administered internal restoration and updating!)

When I look at the grainy “olden day” photos that we have of Hope Villa, it is hard to imagine what it was like to live at the Heads in the early 1900’s.  People looked so old-fashioned, dressed in such formal, staid clothing and had very stern facial expressions!  I think the people of the time were tougher than we are today.  And yet they knew how to enjoy themselves too – many Knysna locals would use the accommodation at the Heads as holiday accommodation.

In fact the land on which Hope Villa was built was owned by Thomas George Anderson Horn, a hotelkeeper.  He was born at the Royal Hotel in Main Street, Knysna in 1859 and became the owner/manager of the hotel after having taken over the management of the hotel from his father Captain Thomas Horn, in 1879.  Once the hotel had grown into a successful business, Thomas Horn decided to create an offer of alternative accommodation for his guests, but at the East Head.  He purchased two lots of land in 1901 on which Hope Villa was built.  In 1903 he bought the 3rd lot of land.  These pieces of land were originally part of the Woodbourne Farm which was owned by Thomas Duthie II.

Maria Horn, wife of Thomas George Anderson Horn, built Hope Villa in 1901.  It is reported that Maria personally supervised the construction, sitting on a chair, under a black umbrella!  Hope Villa was then used as an annex to the Royal Hotel for guests who preferred to stay at the Heads.

I love this excerpt taken from The Herald newspaper, 28 September 1910.  It fits in so well with the feelings I have when I look at the old photos and try and imagine what life would have been like in those times!

“On Wednesday afternoon Mr and Mrs T. G. Horn were “at home” to their many friends at their seaside residence, Hope Villa, at the Heads.  The day opened with a glorious sunshine and blue sky with a slight south-west wind blowing and several of those who intended proceeding down to the Heads by boat were looking forward to an outing on the river.  However, at about 2 o’clock the wind freshened into a regular gale, but in spite of this boats ventured out for the Heads.  The majority of the people seemed to think it would be wiser to proceed by cart and motor.  Soon after three o’clock the weather looked very black and threatening and at about half past three rain began to fall.  In spite of the inclemency of the weather, some sixty-odd people arrived at the Heads where they were provided with dainty refreshments and tea.  Although several heavy showers fell in town, at the Heads only a slight shower interrupted the gathering.”

Isn’t that just lovely?  Now when you walk past Hope Villa on your way to the Heads, or if you choose Hope Villa as your holiday accommodation, you can travel back in time and try to imagine just what it would have been like here in Hope Villa’s early days!

BOOK YOUR STAY AT HOPE VILLA