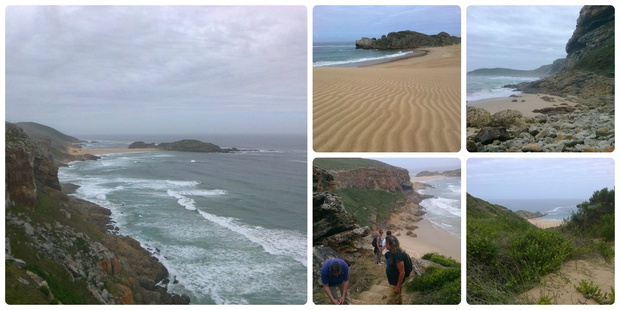 The fynbos-covered Robberg Peninsula is a marine protected area and a national monument. This nature reserve is often referred to as the “Cape Point” of the Garden Route.

Robberg’s rock formations date back to between 110 and 130 million years when South Africa was part of a super continent.  About 120 million years ago the continent split and Robberg’s rocks were deposited in the bed of this new South African sea.  There is evidence of people first living here 120 000 years ago.  As sea levels dropped, grasslands formed and this provided grazing for the Giant Cape Horse, buffalo and hartebeest which became extinct 10 000 years ago.  There is a huge amount of evidence of the Stone Age and the excavation done at Nelson Bay Cave shows this very well.

The vegetation is mainly fynbos but at times one walks through foresty and sand dune sections.  The wildlife on Robberg is incredible and if you are lucky you will spot the Western Cape’s smallest antelope – the rare blue duiker.  The adult males reach a height of only 30cm at their shoulder!  You cannot miss the seal colony on the rocks below the trail – they are noisy and smelly with the males weighing up to 350kg!  You might also see whales and dolphins along the shoreline.  We saw hundreds of dolphins swimming in formation along the coast!

The entrance permit to the reserve costs a mere R40 per person.  We chose to do the 5,5 kilometre Witsand walk which took us just under 2 hours.  We managed to work up quite a sweat despite it being a cool day, so I recommend taking a swimming costume with you so that you can dip into the water when things become too hot!  The Point Circuit is just over 9 kilometres and is more strenuous and is not suitable for children.  Pack a picnic lunch, cozzie and plenty of water and make a day of it!