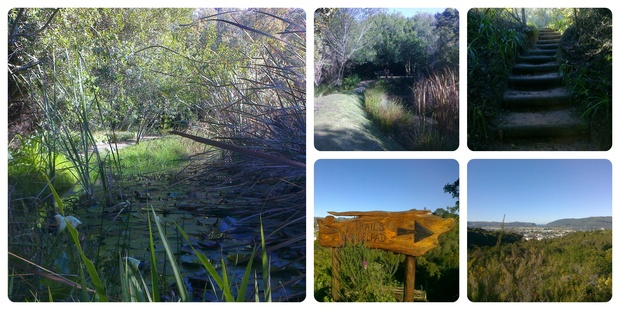 Numerous times over the past couple of weeks I have stumbled upon the name Pledge Nature Reserve. A nature reserve right here in Knysna! This morning was the morning that we headed off to see what all the hype is about.

But first a bit of history...  In the early 1800’s small settlements started popping up in the area that is now Knysna.  By the mid-1800’s the area was flourishing and the housing boom started.  With this came a need for wood and building materials.  Many brickfields on the outskirts of town developed due to the abundance of wood and materials available there.  One of these brickfields was Bok-se-Kloof which is today where Pledge Nature Reserve lies.  The brickfield closed around the early 1900’s.

Through this area once ran a stream, which due to development in later years, silted up and stopped flowing.  Because the area was in a valley it was not really developed further but it became a dump, and invader vegetation took over.  In 1991 the area was proclaimed a local nature reserve of around 10 hectares.  Thereafter local residents of Knysna managed to clear much of the alien invader bush from the area and today it is filled with fynbos and riverine vegetation.  I was amazed by the number of different proteas that are growing on the slopes of the reserve.  Unfortunately most of them have flowered already but I can imagine how awesome the area must look when they are all in flower!

Pledge Nature Reserve lies just behind the town centre, a short drive up from the Main Road, and about 8 kilometres from Hope Villa.  There are many short trails meandering through the reserve.  The pathways are well kept and signposted according to the various different routes.  Unfortunately there were no maps at the entrance to the reserve indicating the different trails but a map can be found on the reserve website.  Many well positioned benches are placed throughout the reserve and there is a very peaceful pond along one of the pathways that takes you lower in the valley where I would imagine one could sit for hours watching the birds at play.  The stream is now running again although when we were there this morning I was surprised that it looked a bit milky rather than the usual “brak” water that streams in this area normally are.  One of the pathways leads to a view point at the top of the reserve.  The path we were on took us through the forest and as we got higher the vegetation changed to fynbos and suddenly we were out in the sunshine, faced with a fantastic view over the town, Thesen Island and straight through to the Heads.

We did this walk early in the day when the forest was still waking up so there were many birds to be heard.  Apparently now more than 80 species of birds can be found in the area.

So next time you are in Knysna and feel like escaping to a bit of unspoilt nature not too far away - we have a lovely nature reserve right on our doorstep.